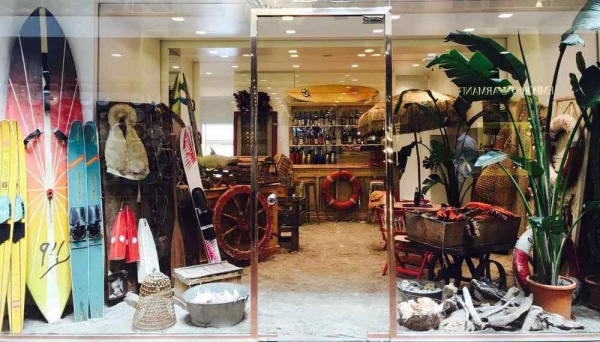 There’s a creativity explosion in Galleria Cavour. From the fusion of two Bolognese original enterpreneurial experiments, Latifolia and Globe Theatre, an explosive space is born, made up two rather eye-catching windows, themed New England Beach and Safari.

Latifolia is a longtime partner of Galleria Cavour Green: the collaboration was born when Galleria Cavour Green was designed as the “Expo 2015 Biodiversity Park Off” and then continued aiming at the development of local excellences and the improvement of the historical town center, always keeping in mind the respect for the environment and for future generations.

Steno Tonelli instead is the inventor of Globe Theatre, an istitution among international collectors.  He started as a set designer and costume designer for the movie industry, collecting unique and original pieces , which he decided to show today in galleria Cavour.

New England Beach and Safari are the two themes chosen by Galleria Cavour Green for this summer . Which better stage for this exceptional  collection than a space which welcomes more than 3 millions of visitors every year and that hosts the most famous luxury brands , both international and Made-in-Italy?